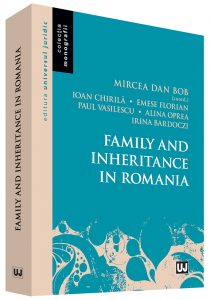 Editorul: “A new Civil Code was put into force in Romania the 1st of October 2011. This book represents the concluding volume for the researches conducted in the frame of the project entitled Evolution of family as a concept and its relevance for the inheritance order – a socio-juridical, religious and philosophical investigation, financed by the Romanian Research Authority.

Its objective was the gathering of a portfolio of conclusions upon which we tried to establish the degree of efficiency of a largely transplanted legislation upon the XIXth-XXth centuries conceptions and realities of the Romanian society, as well as the quality of the response prepared by the new civil legislation in the XXIst. The research has an inter- and also an intra-disciplinary approach and through its connection with the recent enactment of the New Civil Code, by seeking to verify whether this acknowledges the Romanian specific reality within the European Union. It analyzes the tradition of the family relations in the Romanian society of the XIXth and beginning of the XXth, by taking into account the historical and sociological factors, as well as the influence exerted by the religion. As a consequence, it measures the effects of a legislation that was massively borrowed on the basis of a program that was politically constructed upon the philosophical beliefs derived from the Illuminism and we will be able to appreciate and explain its grounding.

Finally, the research tries to answer some specific questions: what family model is the probable triumphant within the reform projects stemming from the interwar period? how did the case receive law the 1944 reform of the successional situation of the surviving spouse? have the soviet-inspired legislative measures of 1954 reached their declared ideological purpose to ensure an equitable freedom within the family and the achievement of the co-interest of the spouses? have these measures had any influence over the legal successional devolution? Finally, the research seeked for the current meaning of the notion of family in Romania (and elsewhere): its definition, composition, the configuration of the personal rapports within its ambit. The answers that were uncovered led to identifying the patrimonial consequences which may arise.

The final purpose was to obtain results which would allow for a critical analysis, undergone in complete understanding of the solutions promoted by the new Romanian Civil Code.”