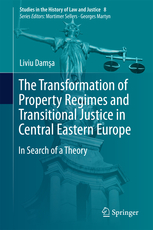 About the book: ”This volume examines the property transformations in post-communist Central Eastern Europe (CEE) and focuses on the role of restitution and privatisation in such transformations. It argues that the theorisation of ‘restitution’ in post-communist CEE is incomplete in the transitional justice scholarship and in the literature on correction of historical wrongs.