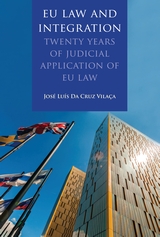 About the book: ”This book contains a collection of articles on different aspects of EU law written by one of Europe’s most distinguished jurists during the past twenty years, some of which appear here for the first time in English. The book includes a Preface by Judge Koen Lenaerts, Vice-President of the European Court of Justice. The book is divided into five parts, covering EU constitutional law, the EU’s judicial architecture, access to justice, European competition law and various other aspects of substantive EU law. In the field of EU constitutional law, the central text discusses the existence of implied material limits to the revision of the Treaties. The author argues that the powers of the Member States to amend the Treaties is limited by the existence of a hard core of principles of EU Treaty law, which cannot be revised without changing the ‘constitutional’ identity of the Union, leading to the conclusion that Member States can no longer be considered as the ‘absolute masters of the Treaties’. Four articles relating to the EU’s judicial system constitute the cornerstone of the collection. Drawing on his own experiences, the author examines the problems and challenges facing the setting up of a new EU court and explores different lines of reform of the EU judicial system.”