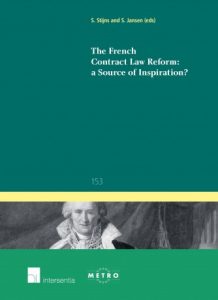 This book results from the Contract Law Workshop of the 20th Ius Commune Conference held 26-27 November 2015. The theme of this Workshop was: ‘The French Contract Law Reform: a Source of Inspiration?’ Since the conference in November 2015, all authors have incorporated comments on the final version of the ordonnance.

Whereas Van Loock briefly sketches the antecedents and the outcome of the reform, the other authors each tackle specific topics of the reform that surprised and/or excited the legal community. Pannebakker tackles the precontractual phase and assesses the attractiveness of the reform for international commercial transactions. Peeraer gives a critical overview of the doctrine of nullity in the ordonnance. Leone explores the potential impact of the ‘significant imbalance’ test in the new ordonnance on employment contracts. In their contributions, Lutzi and Oosterhuis discuss the much-debated provision that introduces the theory of imprévision. The contributions by Jansen and Verkempinck are both focused on remedies: the newly introduced price reduction remedy and damages.Storme criticises the new rules on set-off in the ordonnance, and Mahé addresses the question why the final version of the ordonnance omitted the issue of interpersonal effects of fundamental rights on contractual freedom.”