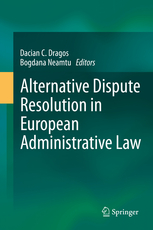 Jean-Bernard Auby, Public Law Professor, Sciences Po, Paris, Director, Chair Mutations de l’Action Publique et du Droit Public: ”This book edited by Dacian Dragos and Bogdana Neamtu is an essential contribution to our knowledge upon an essential issue. If judicial review has played a major role in the construction of our administrative laws, now comes the era of administrative procedure, of which alternative dispute resolution of administrative litigation can be held to be one branch. The overloading of many of our administrative judges renders it an urgent requirement to foster it. The impressive comparative study made under the supervision of Dacian Dragos and Bogdana Neatu brings to us wide information and in-depth analysis about the development and practice of its three main instruments: administrative appeals, ombudsmen and mediation. In this period, when European administrative laws are questioning themselves very much about their core values, about their codification, about their efficiency in ensuring administrative officers’impartiality and probity, about their further opening to democratic inputs, and so on, this book offers a dense set of reflections on something which remains a strategic issue for all administrative laws: how to best protect citizens against administrative abuses and together, how to give the most balanced solutions to administrative litigation, in the strict respect of the rule of law.”

Jacques Ziller, Professor of EU law at the University of Pavia, Department of political and social sciences: ”This book on Alternative Dispute Resolution in European Administrative Law is a remarkable achievement both from an empirical-descriptive point of view as from an academic-theoretical point of view. The thorough analysis of the organisation of administrative appeals, ombudsmanship and mediation in fifteen countries and in the EU legal system should be of major interest to scholars as well as to practitioners; the three comparative chapters summarize the issues that emerge from comparison and will provide food for thought and for discussion for specialists of administrative law and of administrative sciences as a broader interdisciplinary field of studies.”

Gavin Drewry, Emeritus Professor of Public Administration, Department of Politics and International Relations, Royal Holloway, University of London: ”As this interesting collection of research-based essays eloquently demonstrates, ADR can make s a very positive contribution to the resolution of administrative law disputes, complementing the more formal and often slower and more expensive jurisdictions of administrative courts. The book examines, in considerable depth, the development and impact of ADR tools – in particular, administrative appeals, ombudsmen and mediation – in a selection of European countries and at the level of EU law. This is a timely, significant and very welcome addition to the literature on administrative justice.”