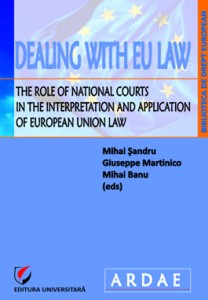 Introducere Mihai Sandru, Giuseppe Martinico, Mihai Banu: ”1. Dealing with EU law or about meeting different legal orders. So much has been said (and written) about the role that judges play in the EU legal order. Suffice is to remember here certain appellations that national courts (or judges) have received during the years of EC/EU law: for Judge David Edward, the national courts are the “Powerhouse of Community Law”;[1] for Professor Monica Claes, these courts have a mandate derived from the European Constitution;[2] or for Michal Bobek, the image created by the case law of the Court of Justice for the national judge is that of a “European judicial Hercules”.[3]

This new book aims to provide some insights on recent trends and patters in judicial dialogue between the Court of Justice of the European Union (hereinafter “CJEU”) and national courts (Constitutional Courts included).

2. Towards a turning point in the multilevel constitutional system of the EU?

It is possible to identify some new trends that might lead to a fundamental turning point in the multilevel constitutional system of the EU.

A first trend is represented by the contradictory developments in the relationship between national Constitutional Court and the CJEU.

On 26 February 2013 the CJEU decided Melloni,[4] a very important case triggered by a preliminary question raised by the Spanish Constitutional Court.

This preliminary question had gathered the attention of scholars for at least two reasons: first of all, it was raised by the Spanish Constitutional Court, which for the first time had decided to use Article 267 TFEU.

As we know in that case CJEU refused a minimalist interpretation of Article 53 of the Charter of Fundamental Rights of the European Union (hereinafter “Charter”), by saying that the “Charter would undermine the principle of the primacy of EU law inasmuch as it would allow a Member State to disapply EU legal rules which are fully in compliance with the Charter where they infringe the fundamental rights guaranteed by that State’s constitution” (paragraph 56, emphasis added) and then added at paragraph 60: “It is true that Article 53 of the Charter confirms that, where an EU legal act calls for national implementing measures, national authorities and courts remain free to apply national standards of protection of fundamental rights, provided that the level of protection provided for by the Charter, as interpreted by the Court, and the primacy, unity and effectiveness of EU law are not thereby compromised” (emphasis added).

This was seen as a return to an absolute conception of primacy[11] and in general it sounded very tough.

More in general, this case gives an idea of the very difficult role played by national Constitutional Courts and of the part relativisation, for certain aspects, of their mandate.

This decision is in fact in line with other recent rulings of the CJEU whereby the Luxembourg Court did not show great deference towards national Constitutional Courts; reference should be made to the Filipiak,[12] Winner Wetten[13] and Križan[14] Cases.

Another tough case is Landtovà,[15] whereby the Luxembourg Court had challenged the case law of the Czech Constitutional Court (Ústavní soud) by concluding that “the Ústavní soud judgment involves a direct discrimination based on nationality and indirect discrimination based on nationality, as a result of the residence test, against those who have made use of their freedom of movement” (paragraph 49, emphasis added).

The reasons behind this revirement might be different: for instance, Constitutional Courts could have been influenced by what Ruggeri[20] called the “Europeanization of counter-limits” and the consequent post-Omega[21] phase, on the one hand, and by the sword represented by the Köbler[22] doctrine, on the other hand.

In any case, it seems that the progressive acceptance of Article 267 TFEU by Constitutional Courts cannot help – per se – in overcoming these tensions between national guardians and the CJEU but this conclusion is not necessarily pessimistic.

In fact constitutional conflicts have always been crucial in the history of EU law, as they have worked as an engine to produce fundamental transformations.

Look at the Solange Case[23] for instance: a potential crisis of the European process which actually served as a turning point, opening a new season in the case law of the CJEU and the Constitutional Courts.

Another potential turning point is the future accession of the EU to the European Convention on Human Rights (hereinafter “ECHR”).

The final draft of the agreement concerning the accession of the EU to the ECHR[24] is ready. This does not mean that the accession process has been concluded. There is still a long road ahead since some key players have to be involved, for instance the Court of Justice of the EU.[25]

Leaving more general questions aside, this event will have deep implications on the function of national courts as well.

Why does this matter? Because national courts are the real ‘natural judges’ of both EU law and the ECHR, for different reasons. They are at the same time the first guardians of the Simmenthal doctrine for EU law[26] and, at the same time, the first adjudicators of the ECHR in national systems, due to the principle of subsidiarity.

3. Brief sketch of the contributions included in this book

The book features seven contributions. Their order is not accidental: specific issues come after more general topics, these latter being dealt with within the first three chapters.

The first article included in this book and written by Giuseppe Martinico serves as a relevant introduction to the subject-matter of this book. It aims at exploring the interesting issue of judicial application of the ECHR and EU law, in order to elucidate the vertical relationship between national judges (constitutional and common law alike) and these external legal sources.

The second contribution is somehow related to the first one: Ioana Răducu discusses the dialogue between courts, and more precisely the way the former accept the decisions rendered by supranational courts and also the role played by the judicial dialogue in reducing the risk of conflicts between courts. Yet the emphasis placed by the author on this judicial dialogue is that of deference. The value of (judicial) dialogue in the EU, as discussed by the author, comes along with pragmatic advantages for both EU and domestic legal orders.

The third chapter, authored by Juan A. Mayoral, approaches the issue of the use of preliminary ruling procedure and tries to establish determinants liable to explain differences in its use between new and old Member States. The value of this contribution lies especially in presenting original and comprehensive data on the use of preliminary references (1961-2011) in all 27 Member States and also in identifying differences in institutional dynamics at the national level.

Giuseppe Bianco and Tatum Ragues present the interesting topic of balance between one fundamental freedom of the European Union (free movement of services) and fundamental rights, as it comes out from the approaches followed by the Court of Justice of the European Union in its rich case law. The authors emphasize the constitutional dimension of the principle of proportionality in the approach taken by the Court of Justice.

Within the same preliminary ruling procedure, Ricardo García Antón approaches in the fifth chapter of this book the role played by the Court of Justice in the field of indirect taxation. Two fundamental questions are explained here: the judicial dialogue between the European court and national courts and the role adopted by the Court of Justice. According to the author, within this field, the Court adopts a more hierarchical role, rather than the traditional cooperative one: “the traditional functions of the CJEU within the preliminary reference system are being replaced by those which belong to a national Supreme Court” (p 116). This paradigm shift is explored at length.

The sixth contribution, written by Mihaela Vrabie, approaches the status of the Charter of Fundamental Rights of the European Union in the framework of the preliminary reference procedure, also concerning the much debated issue of the field of application of the Charter with regard to Member States.

The final chapter introduces the parallel application of the Charter of Fundamental Rights and the European Convention on Human Rights by Romanian courts, as pointed out by certain preliminary references to the Court of Justice made by the former, but also in certain decisions by which courts rejected requests of the parties to make references to the Court of Justice. Certain patterns in that regard are approached.

[8] Corte Costituzionale, sentenza no. 102/2008 and ordinanza no. 103/2008, available at www.cortecostituzionale.it. The preliminary reference was raised during principaliter proceedings.

[19] “The Court has concluded therefrom that the existence of a rule of national law whereby courts or tribunals against whose decisions there is a judicial remedy are bound on points of law by the rulings of a court superior to them cannot, on the basis of that fact alone, deprive the lower courts of the right provided for in Article 267 TFEU to refer questions on the interpretation of EU law to the Court of Justice (see, to that effect, Rheinmühlen-Düsseldorf, paragraphs 4 and 5, and Cartesio, paragraph 94). The lower court must be free, in particular if it considers that a higher court’s legal ruling could lead it to give a judgment contrary to EU law, to refer to the Court questions which concern it (Case C-378/08 ERG and Others [2010] ECR I-0000, paragraph 32)” (paragraph 42), Joined Cases C-188/10 and C-189/10, Melki and Abdeli, [2010] ECR I-5667.