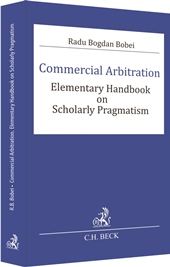 Radu Bogdan Bobei: “To write an Elementary Handbook on Scholarly Pragmatism in the context of Commercial Arbitration may mean to schematically present and explain the basic concepts and principles familiar for commercial arbitration. To write such Elementary Handbook may also mean to kindly invite the arbitration practitioner to not miss the legal, business and scholarly interpretation of the concepts and principles above.

The starting point of writing this Elementary Handbook was Romanian arbitration law. Afterwards it has been outlined the concepts and principles specified in UNCITRAL Model Law on International Commercial Arbitration (1985, with amendments as adopted in 2006). For the purpose of smoothly solving the conflict of mentalities, if any, between domestic mentalities and international mentality with regard the interpretation above, a brief glance on international jurisprudence developed under arbitration laws worldwide enacting the Model Law above seemed to me appropriate to be followed.

Promoting the so-called ideology of “scholarly pragmatism” in the context of commercial arbitration may mean to facilitate the flexible coexistence and cohesion of legal, business and scholarly interpretation of any concepts arising out the disputable facts.

Such scholarly pragmatism may encourage any arbitration practitioner to be and remain lively irrespective of its place of living: Bucharest, Moscow, Warsaw, München, London, New York or Capri Island.“